Here are 14 Anticipated Reads for February 2020

It’s your favorite time of the month when I talk about the upcoming releases that have caught my eye and your TBRs magically grow!

📝 In case you are wondering how I manage to keep track of upcoming releases and choose the books I am most excited to highlight, check out my Edelweiss 2.0 Guide!

Here are 14 Anticipated Reads for January 2020

This post is late and it is the fault of all the amazing releases coming out in January! Literally the two times I have gotten prepared to write this post, another January title called to me and I decided it would be more fun to read it. Oops?

We are starting 2020 off with a bang and we’re sure to not climb out from our TBR Mountains anytime soon. I narrowed my initial list of 24 shiny releases for January down to 14; January 7th and 21st will prove to be TBR ruining. Hold on to your wallets, friends!

Anna Undreaming is the first physical book that I ever received for review, and I was absolutely blown away by it when I finally got around to reading this debut urban fantasy earlier this year.

I don’t normally post cover reveals on my blog, but when Thomas reached out to me to ask if I would like to take part in the cover reveal for the second book in The Metiks Fade Trilogy – Anna and the Moonlight Road – I was excited. But I wanted to do my own spin to it, so I asked him a few interview questions about the trilogy to include (and sway your opinions) in the post and he graciously accepted! 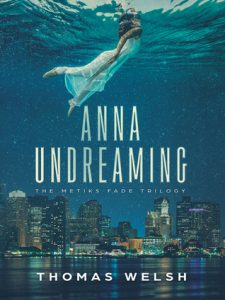 Anna is a student surviving the city, and she lives by a simple credo, “Never play their game; their game is always rigged.” For every man she has ever known, it’s a saying that has served her well.

That all changes on the night of “The Big Storm,” when Anna is slipped a date rape drug. Though she saves herself and her best friend, Anna is lost to the dark heart of the city and finds herself hunted by The Night Collectors. Unsure if these monsters are real or hallucinations, Anna nonetheless fights them as best she can. The battle attracts a stranger—Teej—who saves her using powers she cannot understand. He explains that she is an Undreamer and possesses the same powers, and in the future, he will not be the one to save her. She will save him.

But Anna is not yet ready to join Teej and stand against The Dreamers. She has difficult decisions of her own to make. Decisions she has always run from. She still has her partner’s suicide letter. It remains unopened. She still wears his ring, though she can’t seem to remember his face.

Anna learns of The Dreamers – artists so preeminent in their respective fields that they can paint, dance, sew or sing new realities – and as she travels through their creations, she learns that there’s as much beauty in the world as there is horror. With a complex conspiracy at work within the community of Dreamers that threatens to undermine reality itself, Anna will have to look deep within herself, and eventually have to face the horrors of her own past, to save her old world as well as her new one.

Anna Undreaming is a dark urban fantasy, and the first book in The Metiks Fade trilogy.[/scroll-box]

The year is winding down and Publishing”s Assault on My Bank Account Balance is finally beginning to wane. Which is good, because I just made the appalling revelation that 2/3 of the books on my shelves I haven’t read yet. Expect a shame post on this at some point once I get my motivation to actually write posts.

As there aren’t many November and December releases, I decided to combine the rest of the year into this edition of Anticipated Reads. It is almost as if everyone is leaving December to the Children of Blood and Bone follow-up, but I’ll take it as I have a lot of reading to do!

📝 In case you are wondering how I manage to keep track of upcoming releases and choose the books I am most excited to highlight, check out my Edelweiss 2.0 Guide!

Welcome friends to my sixth author interview as a part of my Novel19 Class! This year I wanted to do something to help boost new author voices and stories, and this is a project that I am really excited about! For more information about my Novel19 Class and the other five books that I’ve chosen, please check out my announcement post.

“I hope it’s found by people who like books that ask questions. For me, the books in my youth stayed with me far longer than the others were the ones that broke my heart while leaving me thinking. Ender’s Game, The Once and Future King, Watchmen. If readers have a fraction of the feelings for Fireborne that I did for those books, I’ll feel like I’ve done my job.”

Today I am so excited to have Rosaria Munda on the blog to talk about her debut fantasy novel, Fireborne, which released into the wild yesterday! Read on to learn how political science courses helped shape this story, how studying the Latin language broke us, with some really amazing fan art as well!