I’m a simple gal, I see this on Twitter and immediately add the book to my TBR: “if you want a jazz age murder mystery starring a tiny, tired lesbian, look no further than DEAD DEAD GIRLS.” And let me tell you: this debut historical mystery did not disappoint! With an amazing atmosphere, complex characters, and engaging plot, I devoured this book in two sittings and can’t wait for Louise’s next adventure. 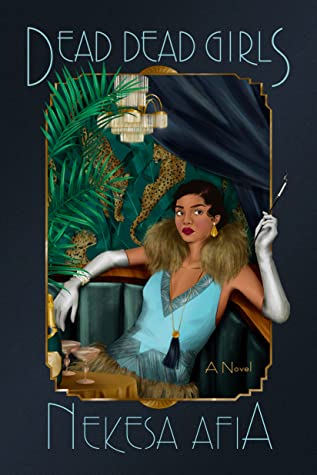 The start of an exciting new historical mystery series set in 1920s Harlem featuring Louise Lloyd, a young black woman caught up in a series of murders way too close to home…

Following a harrowing kidnapping ordeal when she was in her teens, Louise is doing everything she can to maintain a normal life. She’s succeeding, too. She spends her days working at Maggie’s Café and her nights at the Zodiac, Manhattan’s hottest speakeasy. Louise’s friends might say she’s running from her past and the notoriety that still stalks her, but don’t tell her that.

When a girl turns up dead in front of the café, Louise is forced to confront something she’s been trying to ignore–several local black girls have been murdered over the past few weeks. After an altercation with a local police officer gets her arrested, Louise is given an ultimatum: She can either help solve the case or let a judge make an example of her.

Louise has no choice but to take the case and soon finds herself toe-to-toe with a murderous mastermind. She’ll have to tackle her own fears and the prejudices of New York City society if she wants to catch a killer and save her own life in the process.

attempted rape, depictions of grief, loss of a loved one, murder, racism, sexism, use of n-word, victim blaming

My Review for Dead Dead Girls

Instantly gripping with a sense of unease creeping from the narrative, I was transported to Jazz Age New York City. Let’s set the scene for Dead Dead Girls with some Jazz ! I loved how the reader is introduced to Louise in the “present time” of 1926 on the dance floor of a Prohibition era club: the freedom and excitement of expressing herself dances on the page. The Zodiac is where she can be herself and dance with her partner Rosa.

“On nights like tonight, everything fell into place, and ‘good’ wasn’t even the best word to describe it. ‘Magical,’ maybe. The way the room vibrated with anticipation as the band struck up, and she was whirled onto the dance floor — it always elicited the same feeling.”

Diminutive in stature but not in personality, Louise is a main character you can’t help but root for. A survivor of kidnapping ten years prior, she lives a happy and ‘simple’ life as a waitress and tries to move past her notoriety. But when Black girls turn up dead, the police “ask” (aka force) Louise to help them solve the crimes because she can go where the white cops can’t. This is the last thing she wants, but she feels a responsibility to her community to do what she can… and it’s quickly obvious that the police haven’t been doing much in their investigation. She fights for Black girls who the system seems to not care about and I like how she challenges white apathy.

“Summers were time for them to get together as a community. But no one trusted anyone anymore. There was doubt seeping in through the cracks of a community that used to be so close.”

Expertly plotted, I love how the clues and hints all tie into the greater mystery rather than having obvious and poorly contrived red herrings. Every chapter ends with a quip that only someone recalling with 20/20 perspective would say, and that not only kept me on my toes but kept me reading. I had to know what would happen next, and I was on pins and needles trying to figure out who the killer is and who the killer will attack next. It’s a fast read and one I struggled to put down.

“It was strange to see how her story wasn’t a story until it was. There was no mention of missing girls, no mention of her being snatched from the sidewalk blocks from her home, no mention of this utterly life-changing event, until there was a fifteen-year-old Louise looking shellshocked and dirty, accompanied by three other girls.”

There’s a parallel spanning ten years in Louise’s life: when she was abducted in the past and her trying to solve the murders in the present. How no one beyond the community seemed to care about the missing girls until Louise escape; how no one cared about the murdered girls until bodies were left out in the open. It’s a critique on not only the news cycle and sensationalism of media but also how crimes against Black people often go unreported and under-investigated. Lingo and slang of the era helps to solidify the era, as sadly the trials and tribulations of Louise and other Black girls of Harlem could have been set in modern times with little difference.

The pacing is a little weird towards the end of the book, and I would have liked maybe 20 more pages. I was genuinely wondering if there was going to be a resolution in this book because I was getting close to the end and it was still all rising action building toward the final confrontation… and then it’s resolved in a page. I had a case of reader whiplash because I was vibing so hard with the book and then it was over in a blink; I was left feeling a little unsatisfied, which is a shame because other than that it was a stellar read.

Overall, Nekesa Afia’s historical mystery debut wowed me. I love being so engaged in a plot that I can’t put a book down, and the mystery itself is plotted well. While the ending came a little quicker than I’d have liked, it’s a testament that I wanted to keep reading. I look forward to the next installment in this series and recommend this one to lovers of historical mystery with female characters who become detectives to speak for the forgotten victims.

There’s a Patreon-Exclusive reading vlog for Dead Dead Girls available for all Reader Voracious tiers now! Not only do my reading vlogs offer unfiltered, as I read thoughts of the book (spoiler-free as possible), but usually my adorable cat makes an appearance or ten in them as well.

I thought I’d include a snippet from the Dead Dead Girls reading vlog so you can get an idea of them. Vlogs are especially fun when it’s a mystery or thriller…

💬  Have you read Dead Dead yet? If so, what are your thoughts?

💬  What are your favorite historical fiction mysteries? What should I add to my TBR?