You are here: Home / Random & Bookish / Leyla’s Leitmotif – The Light at the Bottom of the World Inspired Playlist

Greetings friends and welcome to my stop on the Blog Tour for The Light at the Bottom of the World by London Shah, which comes out in paperback on September 28, 2021!

“I turn down the blaring punk rock music ricocheting off the submersible’s interior and [has a phone conversation].
The Clash’s guitar riff resumes its rightful decibel as I rise.”

Today’s creative post is born of my love of punk rock and immense glee experienced when Leyla was blaring The Clash. I knew this was my time to thrive!

/My Light at the Bottom of the World Review

Based on Leyla’s love for The Clash, I decided that this playlist would be populated largely by the iconic bands often named as progenitors for punk rock. She’d likely land on the Danzig side of the fence when asked which Misfits frontman she prefers (while I love Danzig, I also appreciate the Michale Graves era).

So what would Leyla recommend you listen to? Check out my playlist with some of my favorite songs!

Leyla’s Leitmotif may be punk rock, but the post-metal (shoegaze) band Alcest makes me think of being underwater. The visuals of the music video pair with the idea of protecting the planet… something that didn’t quite happen in The Light at the Bottom of the World.

About The Light at the Bottom of the World 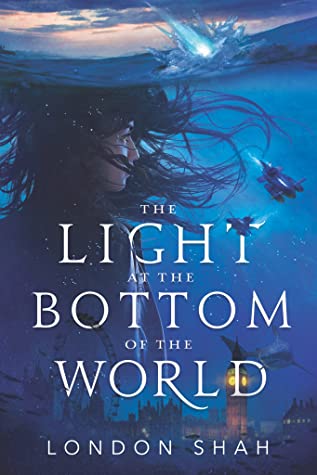 Hope had abandoned them to the wrath of all the waters.

At the end of the twenty-first century, the world has changed dramatically, but life continues one thousand feet below the ocean’s surface. In Great Britain, sea creatures swim among the ruins of Big Ben and the Tower of London, and citizens waver between fear and hope; fear of what lurks in the abyss, and hope that humanity will soon discover a way to reclaim the Earth.

Meanwhile, sixteen-year-old Leyla McQueen has her own problems to deal with. Her father’s been arrested, accused of taking advantage of victims of the Seasickness-a debilitating malaise that consumes people, often claiming their lives. But Leyla knows he’s innocent, and all she’s interested in is getting him back so that their lives can return to normal.

When she’s picked to race in the action-packed London Submersible Marathon, Leyla gets the chance to secure his freedom; the Prime Minister promises the champion whatever their heart desires. The race takes an unexpected turn, though, and presents her with an opportunity she never wanted: Leyla must venture outside of London for the first time in her life, to find and rescue her father herself.

Now, she’ll have to brave the unfathomable waters and defy a corrupt government determined to keep its secrets, all the while dealing with a secretive, hotheaded companion she never asked for in the first place. If she fails, or falls prey to her own fears, she risks capture–and her father might be lost forever.

Do you like punk rock? Which bands do you like? Who did I miss in this playlist?