I loved everything about this debut first-in-duology fantasy novel: the worldbuilding, the characters, the magic system, and the characters! 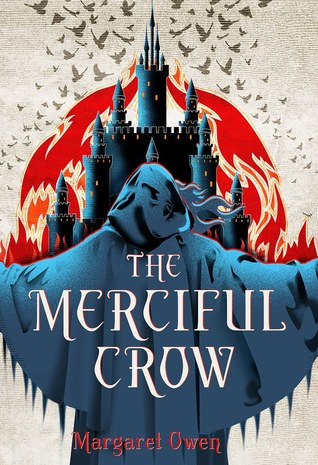 Fie abides by one rule: look after your own. Her Crow caste of undertakers and mercy-killers takes more abuse than coin, but when they’re called to collect royal dead, she’s hoping they’ll find the payout of a lifetime.

When Crown Prince Jasimir turns out to have faked his death, Fie’s ready to cut her losses—and perhaps his throat. But he offers a wager that she can’t refuse: protect him from a ruthless queen, and he’ll protect the Crows when he reigns.

Hawk warrior Tavin has always put Jas’s life before his, magically assuming the prince’s appearance and shadowing his every step. But what happens when Tavin begins to want something to call his own?

I devoured this debut fantasy novel in almost one sitting. I adored the world Owen crafted, the unique magic system, and the characters so much that I pre-ordered a finished copy when I was only 20% into my eARC! If you are a fan of rich fantasy worlds with complex politics, an adorable cat with a fantastic name, and an unlikely group bound together to maybe forge something better, The Merciful Crow is for you.

“Crows had one rule. Look after your own.”

The world-building is vast and intricate, sucking you in right away into the narrative. You are dropped right into the action with the Crows answering a Plague beacon at the palace, which I love. The exposition is doled out slowly to situate the reader in the world and it never felt like an info-dump to me. As I’ve mentioned before, I have the memory of a goldfish and never re-read a synopsis before reading, which makes for some fun surprises while reading the beginning! (view spoiler)

Crows are of the lowest caste in Sabor. They are hated but also needed as the only ones immune to the Sinner’s Plague, giving merciful deaths to plague victims in exchange for payment. Their duty is to roam the land and go where they are needed, answering to Plague Beacons and steering clear of the Oleander Gentry who hunt them in the night.

“By every dead damned god, Fie was sick of bartering for her right to exist.”

Hereditary magic systems have inherent classist undertones, and I appreciated that the structure of society in Sabor and their belief system reinforced and explored that concept. Power is kept within certain lines, and religion keeps the less fortunate as have-nots.

“It was said that every crow had fouled up something grand in their past lives, bad enough for the Covenant to strike them down with plague and boot them directly to a life of atonement in containing the disease.”

The world of Sabor is a complex system of castes, dead gods, Birthrights and witches. You will learn the most about the Crow caste because the story is told in Fie’s POV, but there is a caste legend at the beginning of the book which will definitely help you keep all of the abilities straight while you read. The one thing I am a little confused about is the witch component to magic; Crow witches make sense because Crows do not have a Birthright but rather can use the magic of others through bones and teeth. But does that mean that only witches in the castes have magic?

The Merciful Crow is plotted incredibly well with excellent pacing, this first book reading much like the first act of a play. You can tell that Owen has thought about the overall storyline and tightly built the narrative so that it flows well. This is a book where I was equally invested in the plot and characters. I found it hard to put the book down, and only stopped because my eyes failed me!

I love our Chiefling, Hawk, and Prince so much. I really enjoy adventure stories with unlikely alliances, so it is as if this trio was written for me. Fie is strong and wants to protect her band at all costs, thinking not of herself but the good of her people. But she isn’t perfect either, she is stubborn and prone to firey acts of problem-solving. I adored spending this book inside of her head, learning about her hopes and fears, and how she interacts within a world that looks down on her. Fie is a solid main character, but she doesn’t steal the show – each of the other characters is just as fleshed out and three-dimensional as she is.

“Jasimir flinched. ‘She’s got a point.’
‘She usually does,’ Tavin said under his breath.
‘She’s right here,’ Fie snaped.”

I honestly loved Tavin from his first line, I definitely have a type and that type is a sarcastic bodyguard. Jas is a character that I struggled with at first because he felt bland to me, and then a selfish prince, but he opens up through the story and comes to life. I enjoyed his character growth the most and by the end, I not only warmed up to him but was rooting for him. Each of the characters has their own hopes and dreams, and I want to protect each of them.

For fans of slow-burn romance, you will be quite pleased with the romance in this one! I loved it all. The tension. The banter. The will-they-won’t-they? It felt like a natural progression to me and not at all forced, and I really appreciated that. (Even though I have a few KISS THEM notes in my eARC.) Even though this romance hit the spot, it also doesn’t take over the whole narrative.

“Saborian law allows everyone to bear steel.”
“And that’s well and fine, but the law doesn’t weep much for Crows.”

Through their journey with the Crows, Jas and Tavin experience the reality of life outside of the palace walls, that what is promised does not apply to the lowest groups. I liked watching them struggle to reconcile reality with their idealism and the growth they had when confronted with the truth.

I am impressed the book has a lot of casual representation that I want to see more often in fantasy. The world is casually LGBT+ (pan, gay, and nonbinary characters), the romance features consent, and the book addresses the reality of being a person with ovaries. Fie asks for some laceroot seed to make the long journey more bearable by stopping her period. “‘I’ve no time for bleeding’ […] enough to keep this moon’s bleeding at bay a few weeks.”

“The gods weep for every breath we allow a crow to take! And there will be no peace, no purity, until this blight is purged from our land!”

At its root, this is a book about inequality. I love that it is two, upper-caste men with privilege who are being taught the truth of the world by a woman. They slowly see the world through the eyes of the less fortunate. The oath was created out of mutual need, but will the prince hold his end of the bargain? Does he even care beyond the ramifications of breaking the oath?

Overall, I really enjoyed The Merciful Crow and cannot wait for the next book! I loved that while we didn’t end on a cliffhanger, I am still very invested in the journey for these characters and what happens next. The book handles issues of inequality while also depicting how insidious and intertwined into society it often is. There isn’t an easy fix but that doesn’t snuff out hope for something better. I highly recommend this book to people who love fantasy which explores inequality, hope, and sacrifice as well as vast new worlds.

Many thanks to Henry Holt for providing me with an eARC via Edelweiss for my honest review. Quotations are taken from an uncorrected proof and are subject to change in final publication.