You are here: Home / Book Reviews / Review: A Thousand Fires by Shannon Price

I definitely picked up more Romeo and Juliet vibes from this than expected, but the themes of the Iliad are evident throughout – the underlying story being an important one of privilege and gentrification set in San Francisco. 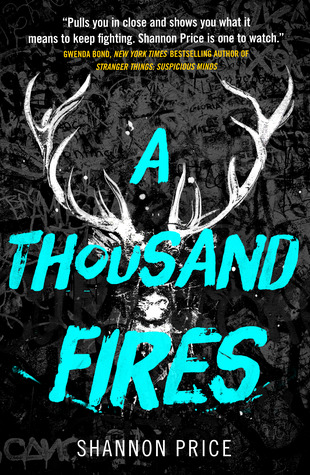 Shannon Price’s A Thousand Fires is a breakout contemporary debut―think The Outsiders meets The Iliad―that’s perfect for fans of Courtney Summers and Veronica Roth.

Valerie Simons knows the city’s gang wars are dangerous—her own brother was killed by the Boars two years ago. But nothing will sway her from joining the elite and beautiful Herons to avenge his death—a death she feels responsible for.

But when Valerie is recruited by the mysterious Stags, their charismatic and volatile leader Jax promises to help her get revenge. Torn between old love and new loyalty, Valerie fights to stay alive as she races across the streets of San Francisco to finish the mission that got her into the gangs.

I read this in one sitting! I definitely picked up more Romeo and Juliet vibes from this than expected, but the themes of the Iliad are evident throughout if you look – the underlying story being an important one of privilege and gentrification set in San Francisco.

“You turn eighteen, and they find you. There is no other recruitment. Eighteen – old enough to have had your heart hardened, young enough that blood still passes through it. Not everyone is recruited, of course, but the gangs are smart. They pick people with nothing to lose. The ones who are angry. Those who join San Francisco’s infamous Red Bridge Wars do so willingly.”

The ultimate war between the haves and the have-nots has waged on the streets of San Fransico for ten years. Three gangs run by teenagers are the players: Herons, Boars, and the mysterious Stags. The Herons are the tech companies and their families; their power and wealth drastically changing the city and displacing the poor. The Boars fight back, largely with violence. And the Stags? Well, some people say they don’t even exist.

The book begins on the night of Valerie’s eighteenth birthday. Her younger brother was killed in crossfire by one of the gangs two years earlier, and she is determined to join the Wars to find out who is responsible to exact her revenge. But instead of being recruited by the Herons like she always thought (and thus being separated from her ex-boyfriend), she joins the Stags.

I really fell for Valerie and the rest of the Stags, especially Micah and Jax. Valerie is biracial (half Filipino and there is Tagalog in the book) and comes from a comfortable middle-class upbringing, which compared to her ex-boyfriend’s family never felt like much. I appreciate that she doesn’t deny her privilege when confronted by her fellow Stags, who for the most part grew up poor. I wish there was stronger LGBTQIAP+ representation. One of the stags, Nianna, tells Valerie that she is “queer and damn proud of it,” but other than that line there isn’t a mention of what her identity explicitly or implicitly is.

Losing her brother really affected Valerie; her grief and guilt run through the book. Major content warning for self-harm. She bakes in order to quiet the anxiety and occupy her thoughts, but she is also a cutter and there is on-page cutting in the book. As someone who has struggled with this for most of her life, I am not sure how I feel about the self-harm representation. I was able to comprehend the motivation because I have experienced it, but I don’t know the motivations were really explored in text. I wish that the way Valerie talks about baking is how she would discuss the cutting. It just felt very surface level to me, and with something as serious as mental health and self-harm, I wish the representation were better than just… being there. Not necessarily harmful, but it made me a little uncomfortable as written in the eARC.

“Live fast, fight for what we want, then die and be remembered for all we accomplished.”

Despite this being a heavy book of loss, grief, and vengeance, it is also filled with hope. Of the little things we can do to make a difference: frequenting mom-and-pop shops when we can, questioning the status quo and, researching things for yourself instead of believing what you are told. It’s a love letter to civil disobedience and paints a picture of potential ways bad actors can ruin the message.

“I figure, if anything, the city’s myriad ailments help the Wars. It’s like a cancer – there’s no easy fix, and while the state and local government tangles itself in red tape, the Wars go on as a newer symptom masked by others.”

The book feels very punk rock to me, and nails the teenage optimism and fire to change the world for the better. They haven’t been hardened by the reality of the world and complacent to let it simply continue as it always has. I haven’t read The Outsiders, but this does remind me of my punk youth… and the Stags’ methods for addressing the growing social inequality in their city reminds me a bit of SLC Punk. *choked sobbing*

“‘Society says we’re bad, but we’re doing what the police can’t and the other gangs won’t […] We’re smarter than they are, and doing the right thing.'”

While I get that Price framed this as a means to discuss inequality, social change, and civil disobedience, I wish that the world-building and history of the war had been further developed. Very little is discussed in terms of how the war started or really how society at large exists and reacts to it. While the beginnings of the feud are uncovered in the book, I was left wanting additional context to sell the war to me.

The other thing that didn’t quite click for me is the romance. Because not only do we have a Romeo and Juliet situation with her on-and-off boyfriend who she literally just told she loved before being sorted into a different gang, but there is another love interest who goes through her luggage and finds her underwear. IDK why. But it is creepy. This particular relationship just never sat right with me, and I can’t exactly say why. (But probably because of the underwear thing.)

The writing is gripping and engaging, once I started the book I was hooked until the end. It’s a fast-paced read and a solid debut. As a note, I think the publisher got the genre classification wrong. The book is listed as a Thriller in their catalog, but it’s really more of a contemporary story with elements of a dystopia setting. There is the mystery of who murdered Valerie’s brother at the center of the story, but don’t go in expecting an edge-of-your-seat thriller.

At the heart, this is a touching story of love, sacrifice, and revenge in a city at war between the haves and the have-nots. San Francisco is a city where gentrification is evident on every street corner thanks to the growth of Silicon Valley, so it is the perfect setting for this story. Price did a fantastic job transporting the reader to the streets of the City, and she is definitely an author to watch as she continues to hone her craft. I don’t normally put my ratings here on the blog, but I wound up giving this one three stars (downgraded from the initial 4 stars after I had more time to process the book). This is a book that had me engaged from the moment I picked it up. I read it in one sitting and enjoyed it, even though I started to question things after the fact. Ultimately, I did read an uncorrected proof and some of this may have changed in the final version.

eARC provided by the publisher via Edelweiss in exchange for my honest review. Quotations taken from an uncorrected proof and subject to change upon final publication.

Have you read A Thousand Fires? Are you a fan of The Iliad?
If so, what are your thoughts?