Believe me, no one is sadder than I am that this book didn’t work for me. I think there have got to be better witchy reads out there without harmful stereotypes and creepy adult behavior for teens to read, though, and can’t recommend this one. 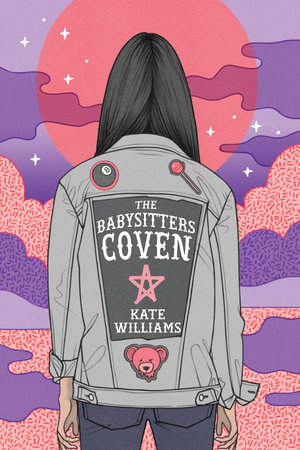 Adventures in Babysitting meets Buffy the Vampire Slayer in this funny, action-packed novel about a coven of witchy babysitters who realize their calling to protect the innocent and save the world from an onslaught of evil.

Seventeen-year-old Esme Pearl has a babysitters club. She knows it’s kinda lame, but what else is she supposed to do? Get a job? Gross. Besides, Esme likes babysitting, and she’s good at it.

And lately Esme needs all the cash she can get, because it seems like destruction follows her wherever she goes. Let’s just say she owes some people a new tree.

Enter Cassandra Heaven. She’s Instagram-model hot, dresses like she found her clothes in a dumpster, and has a rebellious streak as gnarly as the cafeteria food. So why is Cassandra willing to do anything, even take on a potty-training two-year-old, to join Esme’s babysitters club?

The answer lies in a mysterious note Cassandra’s mother left her: “Find the babysitters. Love, Mom.”

Turns out, Esme and Cassandra have more in common than they think, and they’re about to discover what being a babysitter really means: a heroic lineage of superpowers, magic rituals, and saving the innocent from seriously terrifying evil. And all before the parents get home.

A quick note before we dive in: as a reviewer, I strive to be critical yet respectful because I know how much work goes into writing a book. I prescribe to the belief that no two readers read the same book and make an effort to highlight positives about the book, be clear about the reasons why I didn’t enjoy it, and to the extent possible share who may enjoy it. I originally was going to rate this 2 stars, but after sorting through my feelings and writing my review I realized I personally cannot recommend this book. I think there have got to be better witchy reads out there without harmful stereotypes and creepy adult behavior for teens to read.

Believe me, no one is sadder than I am that this book didn’t work for me. The cover is absolutely eye-catching and “Adventures in Babysitting meets Buffy the Vampire Slayer” is a phrase I didn’t know I needed until I heard it. I wanted to love this book and it was one of my most anticipated Fall releases. But unfortunately, I was left wanting for character development and worldbuilding and found the narrative at times questionable and uncomfortable.

There seems to be this trend which relies heavily on nostalgia but isn’t written for the generation who would be most invested. Last year it was Hocus Pocus & The All-New Sequel, and sadly this year we have The Babysitter’s Coven. The protagonists are seventeen years old, but honestly, this reads more on the lower-end of YA. Which is fine but there is a clear disconnect given that the marketing heavily leans on the nostalgia which people in their early-to-mid thirties have for these childhood stories. Ultimately, this was really never a story written for me, but unfortunately, this is not a case of “right book, wrong reader” in my opinion.

If this book were written as-is in the late 90s, I likely would have enjoyed it when I was thirteen years old. I definitely would qualify this as a solid lower-YA read (for which I am not the target audience, and that is totally okay) if it weren’t for the outdated references that I don’t think teenagers in 2019 would relate to and the uncomfortable internalized biases I will touch on later in this review.

In terms of the plot, not a whole lot happens which made for a rather lackluster read for me because I didn’t relate to the characters at all. Not to mention that The Babysitter’s Coven is heavily inspired by both The Babysitter’s Club and Buffy the Vampire Slayer, to the point where our narrator Esmae talks about how she is left with being the Mary Anne of the group despite having terrible handwriting and referencing the Buffyverse on multiple occasions.

I never connected with the characters. Cassandra is very much the ‘Faith’ character to Esmae’s ‘Buffy,’ but neither of them felt fully fleshed out to me. The romance, if we can even call it that, felt contrived and forced. I did, however, enjoy Janis and her sense of style (I’m sure she’s going to be a more fashionable Willow) and I appreciated that there are three characters of color in the book.

The writing is fast-paced but at times jarring because the narrative literally uses chatspeak like ‘LOL,’ ‘IRL,’ and ‘IDK’ in-text and conversation… and no one talks like that. Especially teens today who tend to use laughing emojis instead of writing ‘LOL.’ And as much as it pains me to be so critical, the worldbuilding we do get feels like words changed in the Buffyverse lore. The Hellmouth becomes a Portal, Slayers become Sitters, Watchers become Counsel, and The Council becomes the Synod. The main difference is Sitters don’t kill, they Return the monsters to the Portal. Oh, and they use magic because ~witches~.

I hate to be so critical of a book, especially a debut. But I would be remiss to not mention how uncomfortable the text reads at times. The first-person narrative voice of a teenager is difficult because let’s face it: we can be catty bitches in high school and our thoughts are unfiltered. But Esmae is not a nice person and she is someone who I struggled to want to root for when she is the one being bullied. And let’s talk about the choice to make the main bully overweight and have Esmae refer to her as both a hippo and fat cow. Of making fun of Stephani for not having an ‘e’ at the end of her name. It’s just unnecessary.

The whole Counsel situation and the circumstances for them actually kind of learning about who they are and their powers is… it’s creepy as hell and quite frankly uncalled for. Especially because it goes unchallenged? Like who the HELL would go with an angry person in their car under “get in the backseat or I will make you” duress (this is a literal quote. I am not making this up.)? The whole exposition-in-the-creepy-basement thing made me so uncomfortable. The dude basically kidnaps them but it winds up okay apparently because he’s supposed to be their paranormal teacher.

The last thing I need to mention is the mental health treatment and low-key ableism. Esme’s mother, we learn, had a breakdown a few years back and has been living in a care facility ever since. Only instead of treating this subject with care, Esme calls her mother “crazy” because the kids who make fun of her call her mom “crazy.” To be fair, at the first mention she does say she only uses the term because that’s what other people say, but as someone who suffers from mental illness it made me incredibly uncomfortable. There is also an implication that magic can “fix” mental illness (as well as bad tattoos) that just doesn’t sit well with me.

The whole mental illness subplot was messy and insensitive, and quite frankly bizarre. Her mother’s illness, like the Coach’s obsession with football, serves to keep Esme in the dark about her power rather than give her any sort of character growth. I normally don’t include spoilers in my reviews but I honestly don’t recommend that anyone read this book so her mother isn’t actually ill but cursed by a demon. When the demon is able to cross the Portal, her mental illness goes away and she gets in a cab to help Esme defeat him. Which she does, and then her mental illness returns. The girls learn nothing. Deus ex mother.

Unfortunately, this book did not work for me at all, but it may work for a younger reader who especially loves the 80s and 90s and isn’t as into Buffy as I am. But given some of the cringey and uncomfortable things in the text, I am not really comfortable recommending a young teen to read this book. I really wanted to love this one, and Williams has a lot of quirky ideas that will likely develop in the series as she hones her craft, but I won’t be continuing with this series.