You are here: Home / Interviews / The Writing Process: A Guest Post from Claire Eliza Barlett

If you’re anything like me, you consider authors to be magicians and are constantly in awe of the worlds that they can create. That’s why I am so excited to have author Claire Eliza Bartlett on the blog today to talk about her writing process!

Claire’s second novel The Winter Duke hits shelves tomorrow on March 3rd, and her debut We Rule the Night was featured as part of my Novel19s series. Amazingly, she has a third book coming out this December as well… so suffice to say, I’m interested in learning how she’s done it!

The process of writing a novel is a messy one, no matter how you go about it. Even if you plan your work meticulously, you’ll run into plot holes, poorly thought out character motivations, parts that seemed necessary in the outline but prove weak in the writing…and of course, your characters will run all over the place and try to do whatever they want. After three novels successfully sold to a publisher, I’m still trying to figure out: what’s the best way to write a novel? I don’t know if I’ll ever find the answer, but I’ve run into some patterns along the way.

How I write my novels: Step One

First of all, I can’t start a novel until I have a strong sense of my characters, their predicament, and their world. In fact, if I try to start the novel without these things, it fizzles out and I quickly move on to other projects. I love creating complicated worlds and characters, and they need a bit of thought before I can start developing them on paper.

Once I have the above, what do I do next? To my utter chagrin, I plot. Here’s the thing: I don’t actually like plotting. I think it’s boring and I’d much rather be writing these exciting scenes than just talking about them. In fact, when I was writing my first novel, I thought that plotting was a death knell for my stories, because as soon as I plotted them out I wasn’t interested in writing them down anymore (Looking back, I suspect it was because plotting revealed the utter banality of my stories, but never mind that).

So why do I plot if I don’t like it? I’ve found that plotting does two important things: it helps me write faster, and it challenges my storytelling skills. My stories are almost always too simple when I start them. In THE WINTER DUKE, what I originally thought was a big twist or part of the climax got moved to the halfway point, and it gave the book a lot more action and drive. I did the exact same thing with the novel I’m writing now. Previously, when I wrote by the seat of my pants, I’d run out of steam and start to think the book was boring – in part, because I wasn’t putting enough action into the story. My characters weren’t getting challenged enough.

My plotting has gotten more and more intricate as I’ve written more, going from little notes on a scene I wanted to full-blown scene cards with character beats for everyone involved. Taking a week or so to plot has really helped my drafting, so let me give a piece of advice: it doesn’t matter how many novels you’ve written (or sold, or published, or whatever): you can always experiment with your process. If you’re not completely happy with it, try something new!

Step three is the best step: the drafting step. I love to draft, and my motto is: write fast, rewrite a lot. When doing that first draft, I focus on speed over quality. If I’m drafting and I realize I need to edit something, put in notes or clues or better character development in a part I’ve already written, I’ll pop a note into my file and keep forging ahead. I’ve honed this process so that I prioritize writing when my brain is most active, I deny myself potential distractions, and as a result I can write up to 5,000 words a day. Rinse and repeat until I type the words, THE END.

When my first draft is done, hooray! I get a day off to relax, watch as much TV as I want, and play video games. Maybe I even get two days.

But soon enough, I’m bored of my couch and itching to get back to work. That means it’s time to go through the rubbish heap of my first draft and rewrite everything. Literally everything. I usually write each chapter from the ground up at least one more time, and some chapters have multiple iterations – I just finished a proposal that has six completely rewritten versions of chapter two!

Now, I used to love the idea of doing one big bad edit that was thorough and competent and left me with the novel of my dreams. Unfortunately, one big rewrite is not for me. Like I said, I write fast and I rewrite often. So I generally go through the manuscript in passes. First, I do big rewrites, for things like a major plot shift or a change in story direction. Sometimes this will get mixed in with character development, but I also do at least two Character passes – one for the viewpoint character(s), one for everyone else. This is important for me in making sure that my characters are complicated and feel real, even if they only have a couple of lines in the novel. I do a pass for themes, I do a pass for world building, I do a pass for the romance, and so on. You get the idea.

And when I can’t edit anymore…

That’s when the novel goes out. To my agent, my editor, my betas, who will all send me feedback, so I can edit some more! The process of writing a novel mostly consists of revising it, and so far, it has been a multi-month, multi-step process before my novel is deemed ready to meet the outside world. And when my editor officially accepts it as ready for publication, I can breathe a huge sigh of relief, collapse on my couch for a day (or even two!), and then…

…then it’s time for the next one. Rinse, repeat.

There’s no one way to write a novel. Since finishing my first one sixteen years ago, my process has changed as my understanding of writing has changed. I really feel that how we connect to stories, what we love about them and how we decide to tell them has a big impact on how we approach writing. So if you’re looking to write a novel, dear reader, don’t hesitate to experiment with methods, enjoy the process, and remember that the biggest part of writing is revising.

Claire Eliza Bartlett is a US citizen who grew up in Colorado. She studied history and archaeology and spent time in Switzerland and Wales before settling in Denmark for good. When not at her computer telling mostly false stories, she works as a tour guide in Copenhagen, telling stories that are (mostly) true.

About The Winter Duke 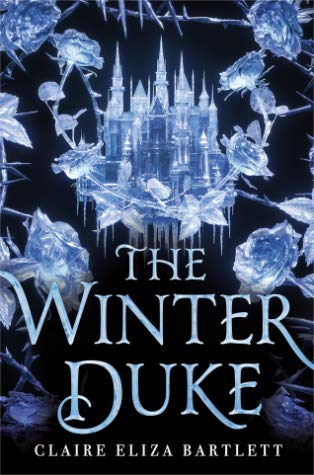 An enchanted tale of intrigue where a duke’s daughter is the only survivor of a magical curse.

When Ekata’s brother is finally named heir, there will be nothing to keep her at home in Kylma Above with her murderous family. Not her books or science experiments, not her family’s icy castle atop a frozen lake, not even the tantalizingly close Kylma Below, a mesmerizing underwater kingdom that provides her family with magic. But just as escape is within reach, her parents and twelve siblings fall under a strange sleeping sickness.

In the space of a single night, Ekata inherits the title of duke, her brother’s warrior bride, and ever-encroaching challengers from without—and within—her own ministry. Nothing has prepared Ekata for diplomacy, for war, for love…or for a crown she has never wanted. If Kylma Above is to survive, Ekata must seize her family’s power. And if Ekata is to survive, she must quickly decide how she will wield it.

Part Sleeping Beauty, part Anastasia, with a thrilling political mystery, The Winter Duke is a spellbinding story about choosing what’s right in the face of danger.